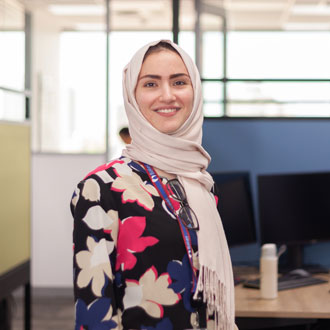 I did two years of Medicine and Surgery in Saudi Arabia at Umm Al-Qura University, and then in 2012, I came to Australia (Armidale) where I did a Bachelor of Biomedical Science at UNE. In 2017, I moved to Melbourne where I obtained a Master of Biotechnology (with Distinction) at RMIT University.

At RMIT, my thesis was entitled The Design and construction of a new strain of, Saccharomyces cerevisiae for the detection of cellular stresses. Where I developed a genetically modified strain of S. cerevisiae which has a reporter gene (mCherry) integrated into the chromosome, to study heat shock and cellular stresses in yeast cells.

Also, during my master’s study I did a Bioinformatics Project which involved undertaking original scientific research in the field of computational structural biology and drug design performing computational ‘screening’ of ligands for potential treatment of various disorders. Several software were used to predict the potential drug targets such as: ligplot and Patch dock to determine the degree of molecular interactions between the drugs and their ligands.

I have joined the Structural Biology and Bioinformatics lab, where I will be working on developing databases and methods to separate out driver from passenger disease mutations.