Development of a method for measuring activity of the human sympathetic nervous system. This knowledge supported the introduction of beta blockers as an effective therapy for heart failure and may pave the way for a device treatment of resistant hypertension.

The sympathetic nervous component of the autonomic nervous system is of critical importance in the regulation of the cardiovascular system. Prior to 1980, no reliable method was available for studying the sympathetic nervous outflow to internal organs in humans. The Baker Institute’s Human Neurotransmitters laboratory developed the isotope dilution method for measuring the release of the sympathetic nerve transmitter, noradrenaline from internal organs, most notably the heart and kidneys. The technique came to be adopted as the ‘gold standard’, as illustrated by its use in the 1998 studies of neural circulatory control on board Space Shuttle Columbia (Ertl, A et al. J Physiol 2002). With the application of organ-specific noradrenaline spillover measurements, regional variations in sympathetic nervous responses were found to be common (in individual organs, in a given setting, sympathetic tone could be up, down or unchanged) contrary to the prevailing theory of global sympathetic activation or inhibition (the ‘Fight or Flight’ response) (Seals, D and Esler, M J Physiol 2000).

From this, Institute scientists undertook a series of detailed physiological studies in patients with advanced heart failure and provided the first evidence that the extent of the increase in cardiac sympathetic tone was a key determinant of heart failure progression and survival (Kaye, D et al. JACC 1995). Further studies identified the mechanisms contributing to the pathophysiology of increased sympathetic nervous system activity in patients with heart failure. The investigations included demonstrating the key role of increased pulmonary artery pressure (Kaye, D et al. JACC 1998), which subsequently led to the identification of a favourable effect of continuous positive airway pressure on cardiac sympathetic tone (Kaye, D et al. Circulation 2001).

This knowledge supported the introduction of beta blockers as an effective therapy for heart failure. It also underlies the testing of selective catheter-based renal sympathetic nerve ablation in patients with resistant hypertension, an intervention based on a demonstration of activation of the renal sympathetic outflow by Baker Institute scientists (Esler, M et al. Physiol Rev 1990). 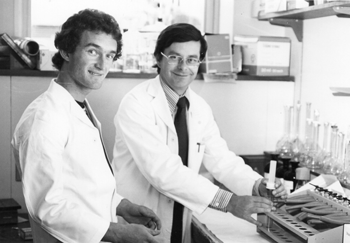 Paul Leonard and Murray Esler performing an assay for the radiolabelled tracer of the sympathetic nervous system neurotransmitter in plasma.