Pioneering research in Pacific and Indian Ocean populations was critical in both the global prediction of the current diabetes epidemic and demonstration of the profound impact of lifestyle change on type 2 diabetes.

Pioneering epidemiological research from the International Diabetes Institute (which later merged with the Baker Institute) contributed to the classification and diagnostic criteria for diabetes and improved understanding of the genetic-environmental and behavioural components of type 2 diabetes (Zimmet, P et al. Nature 2001). Starting originally in 1975 in the Pacific Ocean, these investigators discovered, in the Micronesian island of Nauru, the highest national prevalence of diabetes ever recorded anywhere in the world (Zimmet, P et al. Diabetologia 1977). Based on this and findings in six other Pacific nations, the Indian Ocean nation of Mauritius was then identified as a unique country to study the evolving global diabetes epidemic.

The multi-ethnic population of Mauritius (Asian Indians, Chinese and Creoles) had undergone rapid industrialisation and economic growth over the past several decades, which brought in its wake a dramatic shift in the disease pattern. These ethnic groups constitute two-thirds of the world’s population, so Mauritius acts as a microcosm of the global epidemic. Data from successive studies have been critical for the World Health Organisation and International Diabetes Federation for the global estimates of diabetes. These global estimates (Shaw, J et al. Diabetes Res Clin Pract 2010) have been invaluable to the development of prevention strategies and programs.

This work also led to the establishment of the Australian Diabetes, Obesity and Lifestyle Study (AusDiab) (Dunstan, D et al. Diabetes Care 2002), the largest national study in any developed nation of glucose tolerance testing in the community. The AusDiab study highlighted the fact that there were over one million people with diabetes in Australia and half were undiagnosed. It elevated diabetes as a major public health issue in Australia. It provides benchmark data for Australian diabetes, obesity and cardiovascular disease epidemiology. These data have been used extensively by public health authorities and researchers. 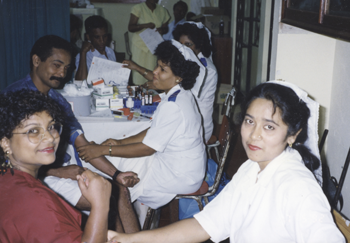