MicroRNAs and risk of cardiovascular disease

After age, the most important cardiovascular risk factor for heart failure is high blood pressure (i.e. hypertension), which is typically associated with cardiac remodelling (i.e. pathological cardiac hypertrophy). Hypertension affects at least 1 in 3 adults and it is also a strong risk factor for coronary disease and stroke. MicroRNA (miRNA) molecules are small non-coding RNA of ~22 nucleotides. They regulate gene expression by post-transcriptional mechanisms, specifically by binding to the 3’ untranslated region (UTR) of a messenger RNA (mRNA). Circulating miRNAs, such as those in plasma and serum samples, are relatively stable and are a new class of potential biomarkers for diseases such as hypertension and heart failure.

Our previous studies found that the miRNA miR-181a was dysregulated in the kidney of patients with hypertension. We also determined that miR-181a regulates renin levels, the rate limiting enzyme of the renin-angiotensin system (RAS). We have recently expanded our analyses to the serum of two independent cohorts of 200 subjects each, and found that miR-181a levels are also associated with systolic and diastolic blood pressure, supporting that this miRNA is a biomarker for blood pressure. We also found that the expression of this miRNA is also associated with up-regulation of several inflammatory and immune system pathways, which have previously been associated with high blood pressure. These exciting findings provide evidence for the involvement of miR-181a in blood pressure regulation, possibly through the RAS, inflammation and the immune system. We are now exploring the use of this miRNA as a biomarker and as a therapeutic target for hypertension. 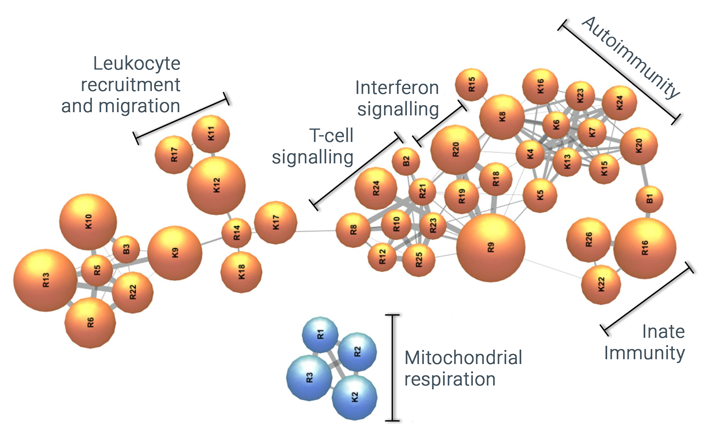 Pathways associated with expression of miR-181a in the human kidney. Gene set enrichment analysis of renal transcriptomes characterized by next-generation RNA sequencing. Nodes represent pathways from Kyoto Encyclopedia of Genes and Genomes (KEGG, pathways marked with K), Reactome (pathways marked with R) and BioCarta (pathways marked with B), identified as positively (orange nodes) or negatively (blue nodes) associated with miR-181a expression. Nodes are sized according to the number of constituent genes. Connections between nodes are sized according to the number of shared genes between pathways (expressed as the overlap coefficient). Source: Figure 2 from Marques et al. Mol Med 2015.