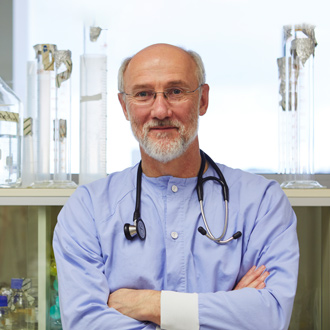 Professor Karlheinz Peter is Deputy Director (Basic and Translational Research), lead of the Atherothrombosis Program and head of the Atherothrombosis and Vascular Biology laboratory at the Baker Heart and Diabetes Institute. He is also an interventional cardiologist at the Alfred Hospital. He is Professor of Medicine and Immunology at Monash University, and holds an adjunct professorial position at La Trobe University. Professor Peter holds a NHMRC L3 Investigator research fellowship, and was recently appointed Head of the Baker Department of Cardiometabolic Health at Melbourne University.

Professor Peter underwent his basic science and clinical training at the University of Freiburg and Heidelberg in Germany. He did his postdoctoral training at Johns Hopkins University, Baltimore and at Scripps Research Foundation, La Jolla, USA. Professor Peter has previously been the director of the cardiac catheter laboratory at the University of Freiburg. Professor Peter has received over 20 prestigious awards/prizes, including the central awards of the German Societies of Cardiology and Angiology as well as the Cardiac Society of Australia and New Zealand and the Australian Heart Foundation. He is editor (including chief and deputy editor) on several international basic science and clinical journals.

Professor Peter’s research is focused on the cellular mechanisms of coronary artery disease and its consequences, myocardial infarction, encompassing the role of platelets, coagulation and inflammation in atherosclerosis, as well as the mechanisms leading to the rupture of atherosclerotic plaques. He developed a unique mouse model of plaque instability/rupture that closely reflects the major complication of human atherosclerosis causing myocardial infarction. He has developed novel biomarker approaches and molecular imaging strategies using ultrasound, magnetic resonance imaging (MRI), CT, positron emission tomography (PET) and fluorescence imaging towards the localisation of thrombi, vulnerable, rupture-prone plaques and the identification of patients at risk of myocardial infarction. One of Professor Peter’s primary research achievements is the development of new 'intelligent' drugs, human single-chain antibodies that display highly promising anti-platelet, anticoagulant, fibrinolytic and anti-inflammatory properties but reduced side effects, particularly aiming to prevent bleeding complications and infections in myocardial infarction patients.